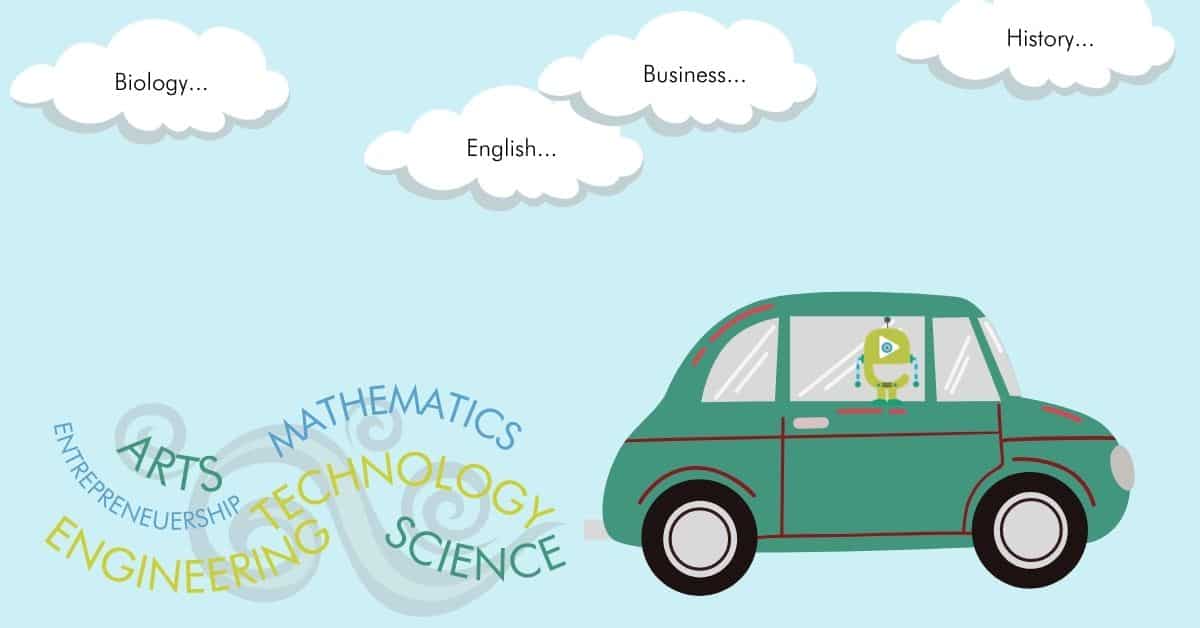 STEAM is still quite a recent development in education. Since the early 2000s, STEM (Science, Technology, Engineering & Maths) has filtered into the education system in a great many countries, aiming to boost interest in professions that were likely to be in more demand in the future. Pretty quickly, it was noted that the creative element and the iterative approach were both missing, so Entrepreneurship was added in (sharing the "E" with Engineering) and the Arts completed what we now call STEAM.

But something else was happening. STEAM is not just science and engineering with the arts running along beside it, but rather an integral vehicle for what is sometimes called "21st-century skills". More than that, even, the STEAM approach is problem-based and project-based, and that naturally means that learners have to draw on a range of skills and knowledge across "subjects" to reach the desired outcome. Sometimes, that outcome is even open-ended, because STEAM is about the discovery and the learning journey, and not always the destination. That sounds a lot like the type of education that policymakers say "can't be done" on a mass scale. But like scientists with a capital "S" , STEAM initiatives are gathering a solid body of evidence to the contrary. So how are they doing it, and how might that affect the wider education system?

Most of us reading this article will have attended a school where different subjects were taught by different teachers in different rooms. Biology here, and English there, History down there, and business Studies up there. When pushing for traditional education systems to get rid of the idea of "subjects" and bring them together to be more like the real world, there is great resistance.

STEAM, however, has project-based learning at its core, and PBL invites everyone to the party. In one very STEAM example, young learners embarked on a project to build a steamship. They had to design it (art) calculate the understand the principles of how a steamship worked (engineering), source the right tools and materials (technology), calculate the heat it needed to produce (maths), calculate the costs to make versus what people might pay to own one (entrepreneurship and business) and present their findings to the class and parents (English, communication, presentation skills). Nobody said "ok stop science now. It's time for maths", because in the real world these fields are entirely interdependent.

The project is the focus and the problem has to be solved. As challenges present themselves, the learners turn to whichever areas of knowledge that can help them, and you can be sure that they will remember it far better if it is something they have already decided they need to know.

But not only is knowledge internalized in a deeper, more meaningful and connected way. Problems don't get solved with knowledge alone, and that's where skills come in. STEAM does skills like Celia Cruz does salsa music.

STEAM Skills are the dream skills

Let's get back to that steamship. It hasn't left yet. in fact, it's far from ready. Learners are sitting around the table comparing designs for it. Listening to each others' ideas, interjecting questions, preparing to let go of their own if another, better design is suggested.

Much of this takes support from the teacher or learning guide, but it's authentic communication development. Have you ever done a communication roleplay, or a case study? That is traditional education's best effort at authenticity. Nothing will ever come close to a real world problem. This steamship has to be designed well if it's going to work, and we are trying to be the team that wins the challenge, so let's figure it out.

The first iteration sinks. Back to the prototype, revise, review, redo, retest. Learning from setbacks is something you cannot "teach", but in these projects, learners will experience it first hand, and can be supported each day to reflect on how they felt, and what they learned from it.

Critical thinking, problem solving, collaboration, giving and receiving feedback, conceptual learning and strong cross-disciplinary knowledge frameworks. All of this is in the STEAM DNA, if it is properly supported, and learners are given time and space to grow, discover and reflect. These skills are often "taught" as competencies tacked onto regular assessments. "We know that student A can think critically because they wrote X". We can do better, and STEAM is showing the world that it works.

STEAM for the future

The world around us is VUCA- volatile, uncertain, complex, and ambiguous. Do we think we can prepare our learners for that world by creating artificial assessments, allegorical roleplays, written tests that try to evoke a display of critical thinking so the box can be ticked? The real world must be alive in education.

In this world, we need to know how to adapt, learn from errors, embrace adversity as part of the learning process, be resilient and aware of what we want and who we are. Generation X tends to figure that stuff out in their 40s, and suddenly change careers or move to Bali to go on a yoga retreat.

Imagine we could find out earlier, or at least be given the chance. The only way this will happen, is if we are supported to do it ourselves. Learner-directed education means a sense of agency that at least lets us step with some confidence into that bewildering world outside the school doors.

I have a STEAM

STEAM is not the solution to the existential crisis facing traditional education, but it is an important catalyst for change. For so many policymakers now, it is not possible to say "that just isn't practical and won't work in reality" when people can point to organizations like STEAM School and say "yes it does. It already is working".

As we discussed in our last NEOchats episode, STEAM is the Trojan Horse; already inside the fortress of mainstream education, and bringing change from within. It's too late to lock the gates now. There's no going back. At NEO Academy, we want to be part of this future of education, helping forward-thinking organizations thrive, and preparing learners for a world that just can't be found in a multiple-choice test.